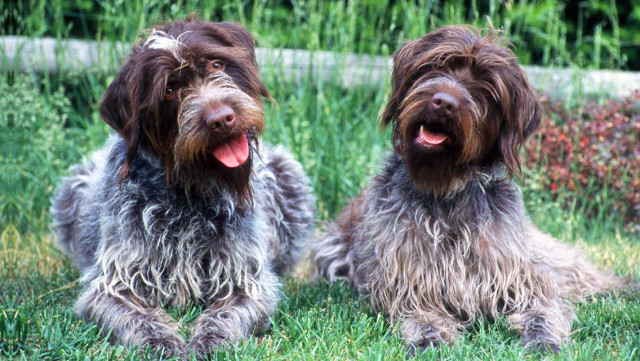 This all-terrain, all-weather and all-game pointer-retriever is the first general-purpose European gun dog to be formally recognized in the United States.

A classic “Euro-dog”, this breed was developed from Dutch, Belgian, German, French and possibly English gundogs by a Dutch breeder Eduard Korthals.

This versatile gundog remains uncommon in Europe and North America.

Eduard Korthales never revealed the breeds he used to develop the Wirehiared Pointing Griffon, but it is likely that the Munsterlander, German Shorthaired Pointer and French griffons (rough coated scent hounds) all played roles.

The history of the Wirehaired Pointing Griffon begins in the mid-1880s. Eduard Korthals of Amsterdam is credited with developing the breed, which he hoped would be a dog who could hunt in marshes and other terrain. He took the dog to France, where it was well received and quickly gained a following.

Known for a time as the Russian Setter, the Griffon gained AKC recognition in 1887. Today the breed still has loyal followers who value it for its pointing and retrieving as well as for its companionship.

It is responsive, obedient, good with children, not snappy and usually easygoing with other dogs, although males can be aggressive.

Color: The coat is preferably steel gray with brown markings. Other acceptable colors: chestnut brown, white and brown, roan, and white and orange.