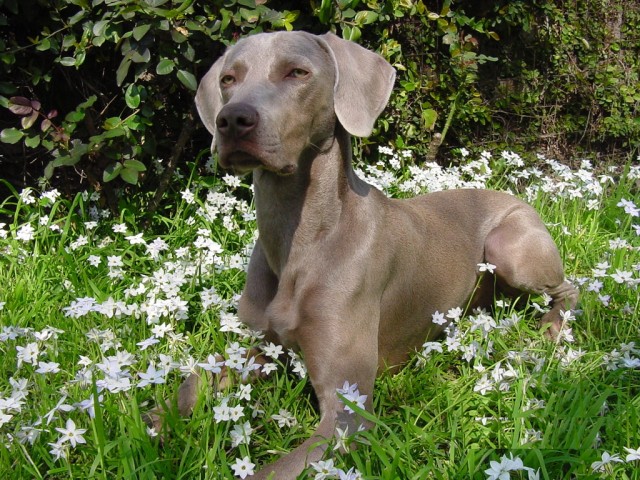 Rippling with muscles, this gundog is popular both as a tracker-retriever and as a companion.

The Weimaraner usually has an alert, obedient and fearless personality, although timidity is not unknown in the breed.

The breed has grace, speed, strength, stamina and undeniable “star quality”, with its handsome carriage and shimmering steel coat color. Easy to obedience train, it is equally at home in towns or rural areas.

Developed in Germany in the 19th century, the Weimaraner is believed to be a descendant of the Bloodhound and early pointing breeds. Originally bred to be an all-around gun dog who could hunt wolves, deer and bear, the Weimaraner later transitioned to more of a bird dog and hunting companion.

Like the Vizsla at the time, the breed was created exclusively for the nobility.

The aim was to create a noble-looking, reliable gun dog. With its restricted ownership and natural instinct, the breed was highly prized and lived with the family. This was unusual since during this period hunting dogs were kept in kennels in packs. This has resulted in a dog that needs to be near humans and that quickly deteriorates when kenneled.

Originally, Germany was possessive of its skilled all-purpose gun dog. Some of the earliest Weimaraners, prior to being sent to America for breeding, were sterilized in order for America not to popularize their special breed.

The breed’s happy, lively temperament has endeared it to families. With the rise in popularity, some changes have been made to the breed.

Not until 1929 did the first Weimaraners leave Germany, when an American was allowed to bring two to the U.S.

Color:
Mouse gray to silver gray.
The dog is the usual grey color but with faint tan markings (similar to Doberman).

Temperament:
Friendly, fearless, and obedient; can be stubborn or headstrong, but learns easily. Needs to run and hunt. Good with children, but may overwhelm little ones.

Energy level: Very high.
Weimaraners are highly energetic and often wear out their owners, requiring appropriate training to learn how to calm them and to help them learn to control their behavior.
No walk is too far, and they will appreciate games and play in addition.

Best owner:
An active owner (hunter or outdoorsy, confident owner) is more likely to provide the vigorous exercising, games, or running that this breed requires.
Like many breeds, untrained and unconfined young dogs often create their own fun when left alone, such as chewing house quarters and furniture. Thus, many that are abandoned have behavioral issues as a result of isolation and inadequate exercise.

Family’s are good owners too.

The Weimaraner is an all-purpose family dog, capable of guarding the home, hunting with the family, and of course, being loving and loyal towards children.
Weimaraners are generally good with children, but may not be appropriate for smaller children due to their tendency to knock them down in the course of play.
They also may knock over elderly people or children by accident.
Early training to sit through positive reinforcement is critical to prevent jumping in the future.

Needs:
Serious daily exercise (this breed tends to be very stubborn. However, with good training, this instinct can be curtailed to some degree. A trained Weimaraner is a companion that will never leave its master’s side), fenced yard, human companionship, obedience training, brushing (this breed’s short coat and unusual eyes give it a distinctive regal appearance. The coat is extremely low-maintenance, short, hard, and smooth to the touch. This breed does not have an undercoat, so extreme cold should be avoided. While their coat is short, this breed does shed).