Toto is a fictional dog in L. Frank Baum's Oz series of children's books, and works derived from them. 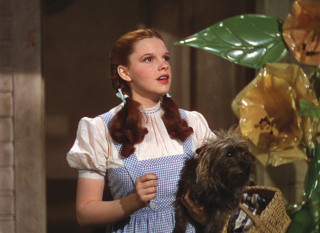 The dog was originally a small terrier drawn by W. W. Denslow for the first edition of the Wizard of Oz (1900). He reappears in numerous adaptations, such as the 1939 Hollywood movie.

Toto belongs to Dorothy Gale, the heroine of the first and many subsequent books. In the first book, he never spoke, although other animals, native to Oz, did. In next books, other animals gained the ability to speak upon reaching Oz or similar lands, but Toto remained speechless. In Tik-Tok of Oz, continuity is restored: Toto reveals that he is able to talk, just like other animals in the land of Oz, and simply chooses not to. In The Lost Princess of Oz, he talks a blue streak.

In The Wonderful Wizard of Oz, Baum did not specifically state Toto’s breed, but describes him as “a little black dog (presumably male except in the 1939 MGM movie a female was used) with long silky hair and small black eyes that twinkled merrily on either side of his funny, wee nose”.

However, from the illustrations in the first book many have concluded that he is a Cairn Terrier while others believe he is a Yorkshire Terrier as this breed was very popular at the time and it fits the illustration quite well. 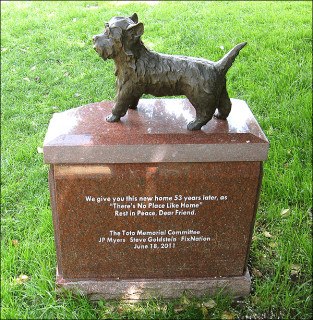 In the 1939 movie The Wizard of Oz, Toto was played by a female brindle Cairn Terrier whose real name was Terry. She was paid a $125 salary each week, which was far more than many of the human actors.
During production, Terry’s foot was broken when one of the Winkie guards accidentally stepped on it. A second dog had to be used while she healed. Due to the popularity of the movie, and because that role was the one she was most remembered for, her owner and trainer changed her official name to Toto. She actually appeared in 13 different films. She died at age 11.

On June 18, 2011 a permanent memorial for Terry was dedicated at the Hollywood Forever Cemetery in Los Angeles.