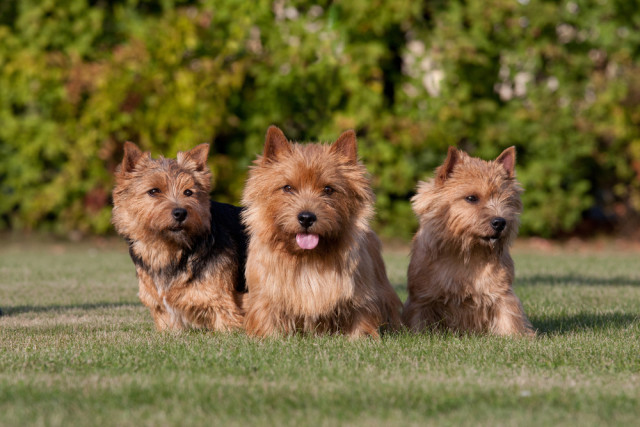 Terriers evolved from hounds – the dachshund, which is a miniaturized dwarfed scent hound; Although dachshunds and many other earth dogs evolved in several European countries, most terriers originated in Great Britain; The name terrier is derived from terra – Latin for “earth".

Terriers were developed to pursue and kill vermin; and had to be energetic, brave, and tenacious; For many Terriers, survival depended on their ability to fend for themselves.

While dachshunds had smooth, close coats, these dogs had rough coats, usually black and tan or mixed fawn, as well as erect ears and sprightly temperaments; No working dog was a more efficient killing machine than the tenacious, tunnel-hugging terrier. During the 19th century, short-legged terriers, carried in saddlebags, would accompany foxhounds on the hunt. When the hounds cornered their quarry, the terriers were released to inflict the coup de grace upon the fox.

During the group’s history, some were bred for sport, to kill rats in pit contest, and later to fight against each other; Bull-baiting breeds were originally large, mastiff-type dogs, but terrier blood was added to heighten their aggression, producing the bull terrier types, which are distinguished from other large, muscular breeds by their tenacity.; When they bite, they don’t let go. Fortunately, such activities are no longer legal, but the breeds as a group have retained their original feisty nature

Generic, hard-working, short-legged terriers existed throughout Great Britain and Ireland, but in 1800’s breeders began producing regional types, many descended from hunting and retrieving dogs; Tough British breeds were exported elsewhere to create new terriers such as the Czesky.

Today’s Terriers appeal to people who are looking for a lot of dog in a small package; Dogs in this group have a good disposition and can become attached to their families. Terriers are not for everyone; They require an owner with enough punk to cope with the Terrier’s distinctive personality; On top of that, a Terrier’s level of high-energy play can be overwhelming to some people.