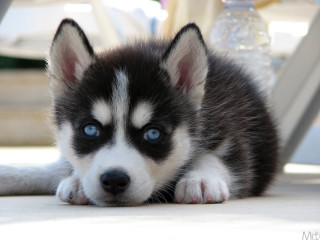 The Siberian Husky breed belongs to the Spitz family, is a medium size, working dog breed from north-eastern Siberia.

Origin of the term “husky” is a corruption nickname “Esky” that applied to the Eskimo and subsequently to their dogs.

The Siberian Husky was bred as a sled dog and has retained the endurance and willingness to work. Smaller and lighter than most other breeds of sled dog, the elegant Siberian Husky is agile, athletic and a tireless worker. Like other ancient northern spitz types, this breed seldom barks, but engages in communal howling much like wolves. Sled dogs were the primary means of transportation in northeastern Asian subarctic communities, and Huskies were utilized during the Alaskan Gold Rush and early long-distance sled races. Air travel and snowmobiles have largely replaced them, but the dog’s agreeable temperament and a growing interest in recreational races kept its popularity high.

Siberian Husky can be found in all color from black to white, usually with markings and brown, blue, non-solid-colored eyes.

They are friendly, gentle, outgoing and adventurous and fun loving. Not overly suspicious, possessive or aggressive. Not to be trusted with small domestic pets.

They energy level is medium to high.

Best owners for Siberian Hasky are athlete or active lover of the outdoors with a firm handle on obedience.

You need to brush them frequently, to have fenced yard and to exercise daily with them.

Triangular ears are parallel to each other when dog is alert.

Used as a draught animal by the nomadic Inuit, the Siberian Husky was chanced upon by 19th-century fur traders and brought to North America in 1909.