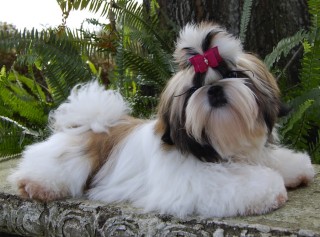 Although the Shih Tzu is typically associated with China, many believe the breed was brought to the Chinese court from Tibet. The Shih Tzu as we know it was most likely developed in China around the late 1800s during the reign of Dowager Empress Cixi.

The breed faced extinction during the Communist Revolution, but 14 dogs imported to England formed the foundation of every Shih Tzu today.

Although is very similar in looks to the Lhasa Apso, the Shih Tzu is different in origin and temperament. A translation of the pre-revolutionary Peking Kennel Club’s breed standard for the Shih Tzu says it should have “a lion head, bear torso, camel hoof, feather-duster tail, palm-leaf ears, rice teeth, pearly petal tongue, and movement like a gold fish”.

The Shih Tzu is less aloof and more playful than its Tibetan lookalike, and this probably accounts for its greater worldwide popularity. The hair on the bridge of its nose tends to grow upwards, and is often tied up on the top of the dogs head.

Best owner: Everyone from families to seniors, but a patient trainer with time for daily grooming or funds for professional appointments.