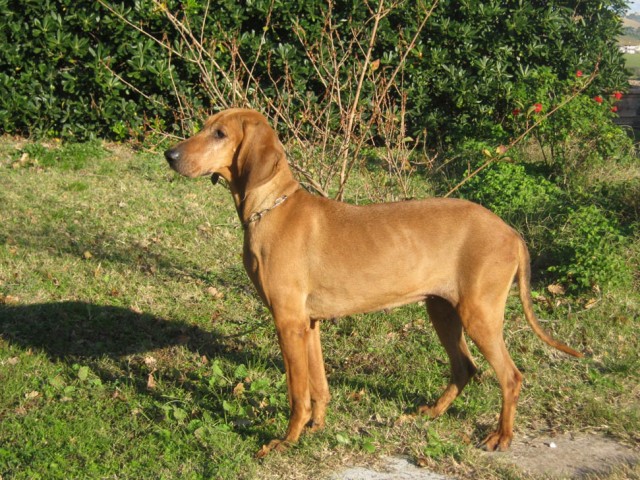 Segugio Italiano is quite common in Italy, where it is originated. Egyptian artefacts from the times of pharaohs show that today’s Segugio is very similar to the Egyptian coursing hounds of antiquity.

The Segugio Italiano is an old breed whose likeness is to be found in ancient sculptures and in Italian Renaissance works of art.

The Segugio Italiano is also known as the Italian Hound it is probably have developed in Italy from Phoenician sight-hounds and Celtic Hounds of southern Gaul. Bulk was added to these hounds by introducing mastiff bloodlines. The origins of this attractive breed are revealed through its conformation – it has the long legs of a sight hound and the face of scent hound.

During the Italian Renaissance, the Segugio’s beauty made it a highly- regarded companion. It was and still is used by Italian farmers for hunting rabbits and hares. The Segugio Italiano has a special way of hunting; it herds the hares and brings them to the hunter.

The Segugio’s sense of smell is exceptional, and once on the trail of game it is similar to the Bloodhound in its single-minded dedication to the chase. The Segugio is interested in the capture and kill.

Interest in the breed was revived in the 20th century. As both a working dog and a companion, this breed is becoming increasingly popular outside Italy.

It is fawn-coloured or black and tan.

Good with people and other dogs, but must be socialized at an early age. It has a noble and calm character; they are very intelligent and affectionate. Good with children; makes a good watchdog.

Calm, confident owner and consistent with the rules.