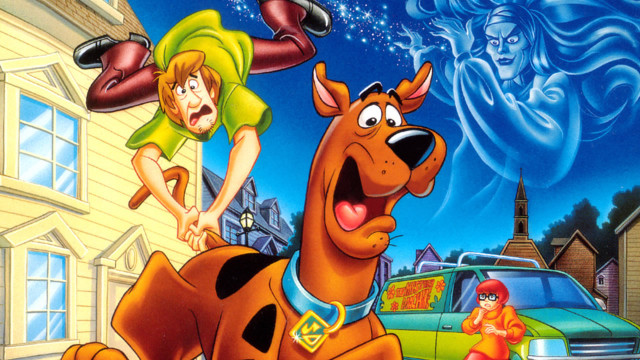 Scooby-Doo is the character and protagonist of the animated television franchise of the same name created in 1969 by the American animation company Hanna-Barbera.

His catchphrase is “Scooby Dooby Doo!”

In most incarnations of the series, Scooby is regarded as a unique Great Dane dog who shows about the same level of intelligence as his friends.

Scooby and Shaggy share several personality traits, mostly being cowardly and perpetually hungry. Yet their friends (Velma, Daphne and Fred) encourage them to go after the costumed villains, usually with “Scooby Snacks”. The biscuit-like dog treat or cookie snack is usually shaped like a bone or Scooby’s dog tag. However, Scooby’s inherent loyalty and courage does often force him to take a heroic stance even without any prodding. Scooby is also extremely ticklish.

Scooby has a speech impediment and tends to pronounce most words as if they begin with an “R”. However, most characters are able to understand him almost perfectly. He keeps his sentences relatively short, usually using charades for anything longer than three or four words.

Scooby is brown from head to toe with several distinctive black spots on his upper body and doesn’t seem to have a melanistic mask. He is generally a quadruped, but displays bipedal “human” characteristics occasionally. Scooby also has opposable thumbs and can use his front paws like hands. He has a black nose and wears an yellow, diamond shaped blue collar with an “SD” (his initials) and has four toes on each foot. Unlike other dogs, Scooby only has one pad on the sole of each of his feet.

Scooby has a fully prehensile tail he can use to swing from or press buttons. Both his head and tail are malleable and useful as a communication aid or creating a distraction.

Over the course of Scooby-Doo’s various spin-offs, various relatives of Scooby were introduced. Here are some of them.

Scrappy Doo: Scooby’s young nephew (and son of Scooby’s sister Ruby-Doo), Scrappy is the bravest of Scooby’s relatives. Scrappy became a recurring character in the Scooby-Doo series beginning in 1979, and was noted for being quite headstrong and always wanting to face off in a fight with the various villains (unlike his uncle).

Yabba Doo: According to Scrappy and Yabba Doo, Yabba is Scooby’s brother, a white dog owned by Deputy Dusty in the American Southwest. Unlike Scooby, Yabba is brave. His typical catchphrase at the end is “Yippity Yabbity Doooo!!!” (and not “Yabba Dabba Doo!”).

Scooby Dum: Scooby’s cousin, a blue-grey dog. A Mortimer Snerd-esque dog who longed to be a detective. Was rather dimwitted (he would keep looking for clues even after the mystery was solved). His catch-phrase was also different than Scooby’s and Scrappy’s. Instead of “Scooby Dooby Dum” his typical custom catch-phrase is “Dum dum Dum DUM!”, an intoning the opening four notes of Beethoven’s Fifth Symphony, which he would do after someone said the word “clue”.

Some of Scooby Doo Love interest:

Amber: In Scooby Doo and the Alien Invaders, Shaggy and Scooby are abducted by the “aliens” and abandoned in the desert. There they meet a wild life photographer, Crystal and her dog Amber. Scooby was heartbroken when it is revealed that Amber and Crystal are actually aliens from another planet and must go home, though he and Shaggy quickly forget about them at the film’s end when they found out there was one more Scooby Snack box left. Amber and Crystal did seem to have actual feelings for Shaggy and Scooby but do not pursue them due to “long distance relationships never working out”.

Scooby Dee: In the The Scooby Doo Show episode “The Chiller Diller Movie Thriller”, Scooby and his cousin Scooby-Dum compete for the affections of canine movie star Scooby-Dee, who is also their cousin.

Chiquita: In Scooby Doo and the Monster of Mexico, Scooby meets up with Chiquita, Alejo’s son’s pet Chihuahua, when the gang arrives at Alejo’s family hotel.

Sled dog: In The Scooby Doo Show episode, A Scary Night With a Snow Beast Fright, Scooby falls in love with a sled dog. At the end, she kisses him.

Don Messick originated the character’s voice patterns, and provided Scooby Doo’s voice in every Scooby Doo production from 1969 until his retirement from the character in 1996.

He is named after a nonsense vocal line in Frank Sinatra’s hit song “Strangers in the Night”.

Previous PostGreat Dane
Next PostDo dogs need to be chipped?