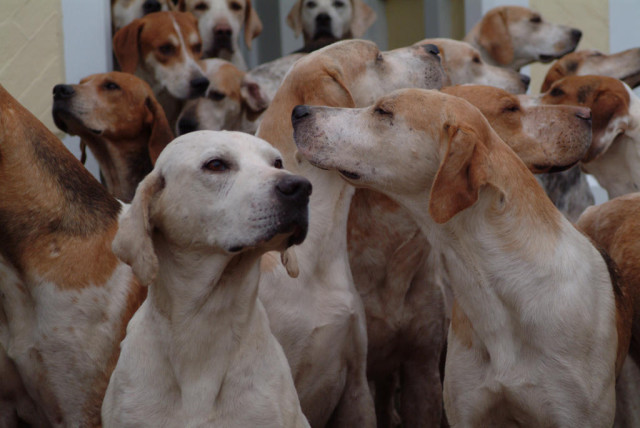 Scent Hounds are breed that primarily hunts by scent rather than sight. They use their noses and profound stamina to wear down game and bring it to bay. The scent hound will bark or howl when it encounters the scent trail of its prey.

Medieval France was very efficient in developing varieties of scent hounds. Hundreds of packs of scent hounds, some comprising up to 1000 dogs, worked the parks and forests of France for the pleasure of the king and his friends.

Some scent hounds were smooth haired, others, called griffons, were wire haired. Some, known as bassets, were bred with short legs.

All scent hounds were bred for efficiency in the hunt. In Great Britain were developed breeds such as the Basset Hound, Foxhound, Beagle, Otterhound and Harrier. Descendants of these dogs were brought to the U.S., making the genetic pool from which the American Foxhound and all the American coonhounds derive.

In Germany, the dachshund, was crossed with long-legged scent hounds. Breeders also developed cold-trailing hounds that could follow a blood trail days old. Swiss hunters produced short-legged breeds. In the Austro-Hungarian Empire were developed long-legged mountain hounds. Polish breeders developed an efficient scent hounds, using stock from central Europe and Russia. These dogs were the property of the nobility, and existed primarily in Europe.

Scent hounds are excellent in following a smell or scent. Most of them have long, dropping ears, which create air currents that help them to detect scents. Their large nasal cavities, and their typically, loose, moist lips can also trap scents. The Bloodhound, whose nasal membrane has a greater surface area than its entire body, is the supreme scent follower.

Scent hounds are not as demonstrative as terriers, as affectionate as companion dogs, or as trainable as gundog.