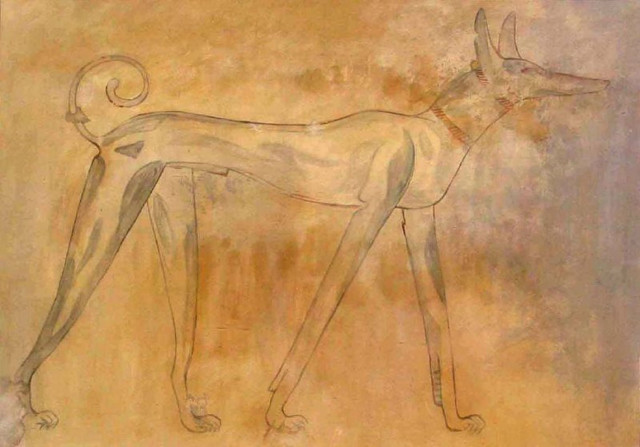 Primitive Dogs are small group of dogs that are descended from the Indian Plains Wolf, Canis lupus pallipes.

Experts think that wandering groups of humans spread out of southwest Asia between 10.000 and 15.000 years ago, accompanied by pariah dogs. Dogs had reached the Middle East and North Africa at least 5.000 years ago, through migration and trade.

The Pharaoh Hound is the oldest recorded breed in the tombs of the pharaohs in ancient Egypt.

Many primitive breeds spread into the heart of Africa. Some of them migrated westwards, others accompanied people to east. Many followed people across today’s Bering Straits. Some of these pariah dogs interbreed with North American wolves, but skeletal remains indicate that distinctly Dingo-like dogs spread first to today’s Arizona, in the southwest United States, and then to today’s states of Georgia and South Carolina, in the southeast America.

The domestic dogs of Mexico and Peru may well be hairless descendants of the Asian pariah dogs.

It’s likely that these dogs descend more recently from African pariah dogs brought to Central and South America by European traders. Spreading through Southeast Asia, the Dingo arrived in Australia 4.000 years ago. Probably the Dingo was traded between Australia and Asia, perhaps by seafarers. The oldest fossil remains found in New Guinea are about 2.000 years old.

Pariah dogs have similar looks, being of medium size with prick or rose ears, curled tails, and compact feet.

Many of them are described as fastidious and primitive in their behaviors. The evolution of primitive dogs involved. Most of them are easy to train in obedience, but some of them are not for every family.

Although some pariah dogs have a long history of domestication, others are closer to their wild roots and it’s not easy to train them.