The Pekingese is an amusing, calm, independent dog. 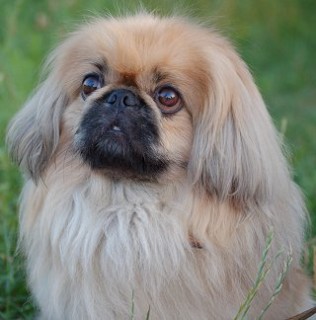 With legends that can be traced back to ancient Chinese dynasties, the Pekingese is truly a regal creature. According to the rules set by the Chinese Dowager Empress Tzi Hsi, the Pekingese should have short, bowed legs so that it cannot wander far, a ruff of fur around its neck to give it an aura of dignity, and selective taste buds so that it should appear dainty. She omitted to mention other striking qualities, including the stubbornness of a mule, the condescension of the haughty, and the speed of a snail.

The Pekingese is an amusing, calm, independent dog, which Chinese legend says is the result of a union between a lion and a monkey, combining the nobleness of the former with the grace of the latter.

At one time the exclusive property of the Chinese Royal Courts, and strongly associated with Buddhism, the first four Pekingese arrived in the West in 1860.

Later, Queen Victoria was given one, causing great demand for the dogs in Britain.

Pekingese are small size dogs, less than 14 pounds (dogs 6 pounds and under are called sleeves, because they could be carried in the sleeves of their Chinese masters).

In all colors, but the exposed skin of the muzzle, nose, lips, and eye rims is black.

Temperament: Regal, intelligent, independent, and self-important. Pekingese are affectionate to family how owns him; often aloof with strangers. May not be sturdy enough for a child’s handling.

Best owner: Low-key owner who is a gentle and patient trainer, and tolerant of snoring.