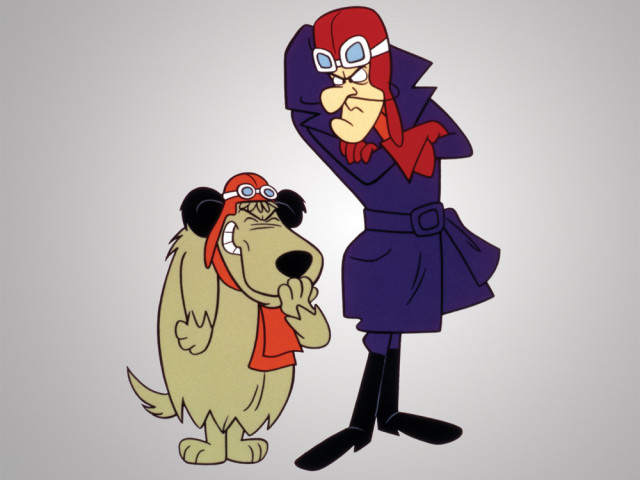 Muttley first appeared in Wacky Races in 1968, as the sidekick of the accident-prone villain Dick Dastardly.

Dick and Muttley were paired together in various later Hanna-Barbera series as bumbling villains.
As his name implies, Muttley is a mixed breed dog, identified in the Wacky Races segment “Dash to Delaware” as a mix of bloodhound, pointer, Airedale terrier and hunting dog.

During Dastardly and Muttley in Their Flying Machines, in the part of Sappy Birthday, Muttley shows a calendar where 16th April is marked; his birthday.

Muttley does not really talk; his main examples of speech are his trademark “wheezy snicker” (usually at Dick’s expense) and a mushy, sotto voce grumble against an unsympathetic or harsh Dick (usually along the lines of “Rashin’ fashin’ Rick Rastardly!”).

Muttley (who turned from a “bluish hue” to a “dusty brown”) wore only a collar in Wacky Races, but in Dastardly and Muttley in Their Flying Machines, he donned a World War I style aviator’s cap and scarf, and served as a flying ace along with Dastardly and two other pilots as members of the “Vulture Squadron”.

Muttley is sometimes confused with the crime-fighting dog Mumbly from The Mumbly Cartoon Show. Mumbly looked similar to Muttley. They had a similar laugh. But, their ears were different and Mumbly had blue fur and wore a trenchcoat.

The character may also have been inspired by the Atom Ant show’s “Precious Pupp”, who was known for laughing the same way.