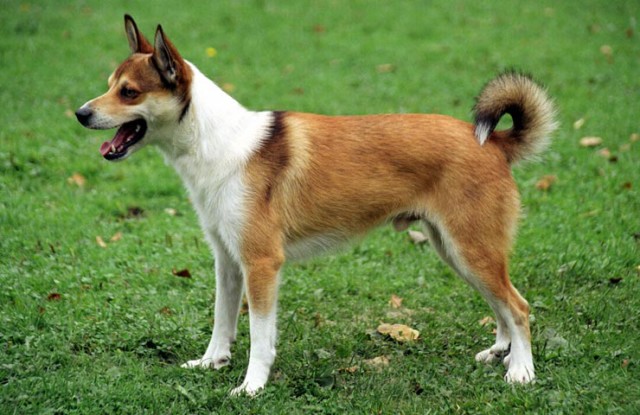 The Lundehund has a long history. They are the most ancient of the Nordic dog breeds; scientific research indicates that the breed has been in existence since before the last Ice Age, surviving by eating fish and sea birds.

Puffins, in the 1800s, became a protected species and were no longer hunted; The dogs were no longer useful to the farmers and the breed numbers dwindled. The Norwegian Lundehun was not recognized as a distinct breed until 1943.

The small and agile Lundehund is unique in having five, rather than usual four, supporting toes on its forepaws; the feet themselves have exceptionally large pads, and the fifth digit, or dewclaw, is double in form.

This combination gave the dog its superb grip as it climbed cliff pathways and traversed rocky crevasses, until it reached a nest and captured a puffin; Another unique feature is a soft fold across the cartilage of the ear; This unusual anatomical trait enabled the dog to fold down its ears to protect them, presumably from dripping water as it searched through cliff passages for its prey.

A lively and responsive breed, the Lundehund is now kept primarily as a companion.

The Lundehund needs a firm, confident, consistent pack leader (owner); without one, he will be stubborn, obstinate and demanding.

Need to be exercised every day with a long daily walk or jog; it will greatly enjoy sessions of play; comb and brush regularly with a firm, bristle brush, paying attention to the undercoat; bathe or dry shampoo only when necessary.