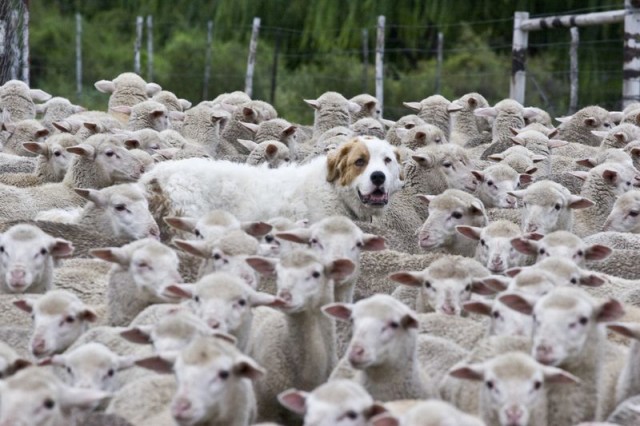 Guarding a person's homestead is natural behavior for dog.

In the delta between the Tigris and Euphrates rivers (now Iraq), where our hunter ancestors became cultivators and farmers, dogs raised puppyhood with sheep, goats or cattle would defend them as members of their own pack.

Flocks and herds of livestock were originally small and could easily be protected as a group from wolves and thieves. As the number of animals increased, small, agile dogs were used to move strays back to the herd – these became herders.

As shepherds began to transport their animals over long distances, another group of dogs evolved the drovers. These both protected livestock and move them along.

These smaller drovers were the forerunners of the modern sheepdog. Through selective breeding, the mastiff was produced to protect flocks and property that followed armies.

These massive dogs spread throughout Europe, and many of today’s mountain dogs are descended from mastiffs.

Cattle-guarding mastiffs accompanied Roman legions 2000 years ago across the Alps to Switzerland, leaving behind the ancestors of the Swiss mountain dogs. In Rome, mastiffs fought either against other animals or among themselves in the gladiators ring. Their descendants became bull and bear fighting dogs, although their main duty remained protecting the home.

Bullmastiff, bulldogs, the Great Dane and Boxer descend from this source.

Livestock guarding remained a primary responsibility of mastiff-type dogs, but cattle and pig farmers and butchers required robust, agile dogs to both protect and move livestock.

he old English sheepdog was once an excellent cattle drover. So, too, were the Corgi and Swedish Vallhund.
In German the Schnauzers and the Rottweiler filled this role, while in France today the Bouvier des Flandres excels as a cattle mover.

In Australia, the Australian Cattle Dog and a variety of heelers still work large herds of cattle.

A variety of sheepdogs developed in the Balkans, while in Hungary the Komondor still guards and protects. Further into Europe, other huge guardians, such as the Kuvasz and Maremma (always white to differentiate them from marauding wolves and to bond them to their flocks), would patrol their large flocks.

The herding shepherd dog continued to evolve, probably from guarding breeds. In Great Britain, this produced the superb collies.

Guarding and herding breeds vary in looks and temperament, but all share a background in protecting and assisting.