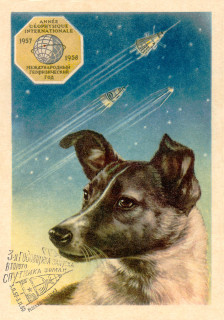 Little was known about the impact of spaceflight on living creatures at the time of Laika’s mission, and the technology to de-orbit had not yet been developed.

Some scientists believed humans would be unable to survive the launch or the conditions of outer space, so engineers viewed flights by animals as a necessary precursor to human missions. The experiment aimed to prove that a living passenger could survive being launched into orbit and endure weightlessness, paving the way for human spaceflight and providing scientists with some of the first data on how living organisms react to spaceflight environments.

The satellite was equipped with scientific instruments for the study of solar radiation and cosmic rays.

It is a known fact that the Earth atmosphere completely absorbs shortwave ultraviolet and X-ray radiation from the Sun, thus protecting living things from its destructive effects. But this same fact makes it impossible to observe such solar radiation from Earth. This radiation causes various processes in the atmosphere resulting in formation of highly ionized layers, which have a significant effect on the propagation of radio waves. The use of artificial satellites made it possible for the first time to conduct systematic measurements of short-wave solar radiation for long periods of time.

But, undoubtedly, the most important scientific achievement, which caught the imagination of the contemporaries, was the flight of a first living thing inside the satellite cabin.

It is impossible to prepare for a manned mission into space without preliminary studies on animals. In USSR, the animals used in the development of systems for man’s life support in space were dogs. Criteria for the animal selection were very strict. Selected were young animals up to 6 years of age, small in size, weighing 5 to 6 kg. They had to have good health and resistance to adverse environments. Preference was given to light-colored dogs – they were easier to see on the TV screen. Besides physical parameters, a lot of attention was paid to their character. Sullen, moody and aggressive animals were rejected at once. Would-be cosmonauts were supposed to be smart. And it turned out that the animals most fit for participation in the experiments were mongrel dogs.

Laika happened to be the first dog to carry out a real space flight. Laika was found as a stray wandering the streets of Moscow. Soviet scientists chose to use Moscow strays since they assumed that such animals had already learned to endure conditions of extreme cold and hunger. Laika was an eleven-pound mongrel female, approximately three years old.

Laika, the Russian name for several breeds of dogs similar to the husky, was the name popularized around the world. The American press dubbed her Muttnik (mutt + suffix -nik) as a pun on Sputnik, or referred to her as Curly. Her true pedigree is unknown, although it is generally accepted that she was part husky or other Nordic breed, and possibly part terrier. 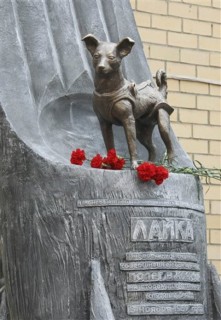 To adapt the dogs to the confines of the tiny cabin of Sputnik 2, they were kept in smaller cages for periods up to 20 days. The dogs were placed in centrifuges that simulated the acceleration of a rocket launch and were placed in machines that simulated the noises of the spacecraft. The dogs were trained to eat a special high-nutrition gel that would be their food in space.

Observations of the dogs helped to identify a number of important rules for the future manned spaceflight. Leaping ahead a little, it can be recalled that Y.A. Gagarin’s mission on Vostok was preceded by 6 launches of these spacecraft carrying dogs. They helped S.P.Korolev to make a decision to launch the first man into space.

A small monument in her honour was built near the military research facility in Moscow which prepared Laika’s flight to space. It features a dog standing on top of a rocket.

Previous PostTop 5 Spitz-type dogs
Next PostCan dogs get a heatstroke?