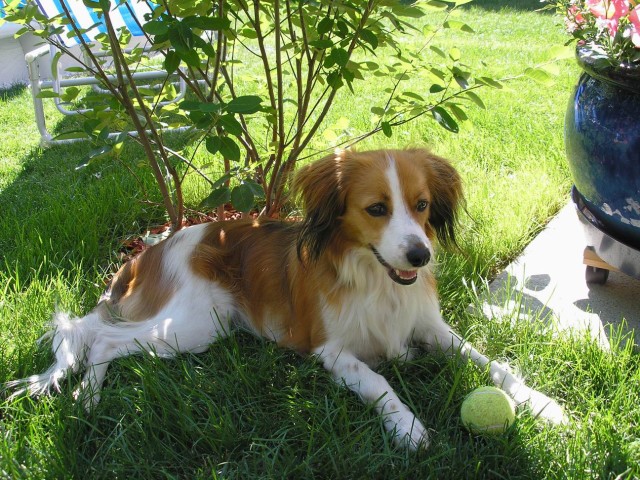 Historically, the Kooikerhondje behaved in much the same way as the now-extinct English Red Decoy Dog.

Dating back at least to the time of William of Orange, this breed virtually disappeared, but was recreated between World War by Baroness van Hardenbroek van Ammerstol.

The Kooikerhondje was developed in the Netherlands around the sixteenth century to be a tolling breed. They were used to lure and drive ducks into “kooien” (cages in the form of canals with traps at the ends), where the hunter (the so-called Kooiker) could easily catch the fowl. The dogs that were used by the Kooiker for this kind of hunting technique, were referred to as the “Kooiker’s hondjes” (literally: Kooiker’s dogs).

Eventually this led to this dog being called Kooikerhondje.

With its lively antics and bushy white tail it enticed ducks and geese towards nets or within shotgun range. Kooikerhondjes are still used to entice ducks, but now they do so into traps made of rush matting, for banding and identification.

However, this friendly, even-tempered breed makes a very satisfying companion.

Size:
Kooikerhondje is a small size spaniel-like sporting dog; size for males is 15 to 17 inches and 14 to 16 inches for females.

Color:
Orange-red and may be patched or solid on pure white although a few small spots on the legs are acceptable. A black tail ring where the color changes from orange-red to white is permitted.

Temperament:
Cheerful, good natured, friendly, quiet, well-behaved, and alert. Depending on its domestic environment, it is kind, happy and lively. They are intelligent, attentive and more than willing to please their owner. The Kooikerhondje adapts to situations quickly, changing his behavior from quiet to lively when the situation allows him to be. He will not always immediately like strangers, instead choosing to retreat. But once he warms up to someone, the trust will be there for the rest of his life.

Kooikerhondje have good appetites and a tendency to put on weight easily.

Previous PostCan I give my dog poke?
Next PostNova Scotia Duck Tolling Retriever