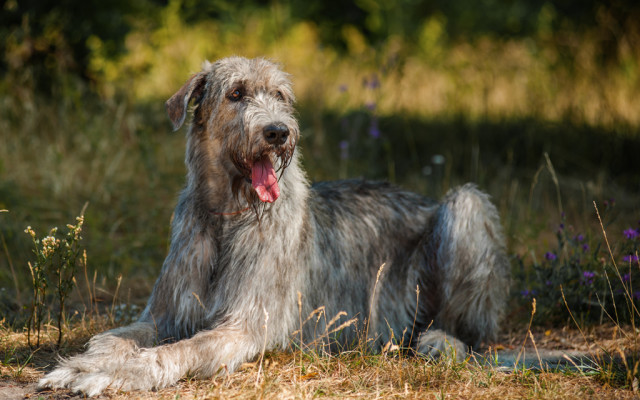 Irish Wolfhounds were bred as hunting dogs by the ancients, who called them Cu Faoil. The Irish continued to breed them for this purpose, as well as to guard their homes and protect their stock.

Originally used by the Celts to hunt wolves, this breed was probably transported to Ireland by the Romans. The Irish Wolfhound’s name originates from its use as a wolf hunter, and not from its appearance. They were used in wars, and for guarding herds and property and for hunting Irish elk, deer, boar and wolves.

Present in Ireland almost 2000 years ago, this noble breed almost completely vanished by the mid – 1800s. It was revitalized by Captain G.A. Graham, a British army officer. The breed was restored by the introduction of Grate Dane and Deerhound.

During the English Conquest of Ireland, only the nobility was allowed to own Irish Wolfhounds, the numbers permitted depending on position. Wolfhounds were much coveted and were frequently given as gifts to important personages and foreign nobles.

References to the Irish Wolfhound in the 18th century tell of its great size, strength and greyhound shape. In the latter half of the 19th century, the breed was successfully recreated, using stock related to the ancient Wolfhound.

Affectionate and loyal, today’s Irish Wolfhound makes an excellent companion and an effective guard dog. Because of its enormous size, it needs a great deal of space.

Patient, kind, thoughtful and very intelligent; can be trusted with children; they are unconditionally loyal to their owner and family. This calm dog gets along well with other dogs.

Active owner in rural home. It is a giant- sized dog, and need some space.

They need a daily walk where the dog is made to heel beside or behind the human holding the lead; never in front. These giant dogs need lots of space to run, but don’t need any more exercise than smaller breeds; regular and thorough grooming with a brush and comb.