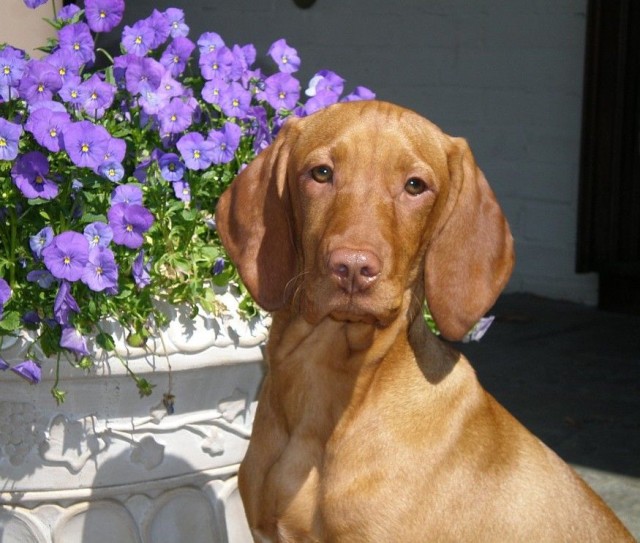 It has a good nose, follows trails diligently and retrieves either game or thrown tennis balls with enthusiasm.

The Vizsla’s history can be traced to Hungary in the Middle Ages. The country was rich in game, and the Vizsla’s superior nose, speed, and hunting ability met the needs of the hunters. The breed excelled at both pointing and retrieving and was a favorite of barons and warlords by the 1700s.

Elegant and gentle, the Hungarian Vizsla probably would not survived World War II, had not Hungarian expatriate taken their favored companions with them when they emigrated to other parts of Europe and North America in 1930s.
The Vizsla’s original dual purpose, pointing and retrieving, has been extended to a third purpose in the last 20 years – that of a widely admired family companion, which is obedient, reliable and healthy. The breed is becoming increasingly popular in Hungary and its original purpose has not been forgotten. In Canada, the wire-haired variety is commonly seen at work as a gun-dog with weekend hunters
.
The name was first used in 1510 to describe the result of crossing two now-extinct breeds the indigenous Pannonian Hound and the yellow Turkish Dog.

Hunter, athlete, or active family in suburbs or country are best owners for Hungarian Vizsla.