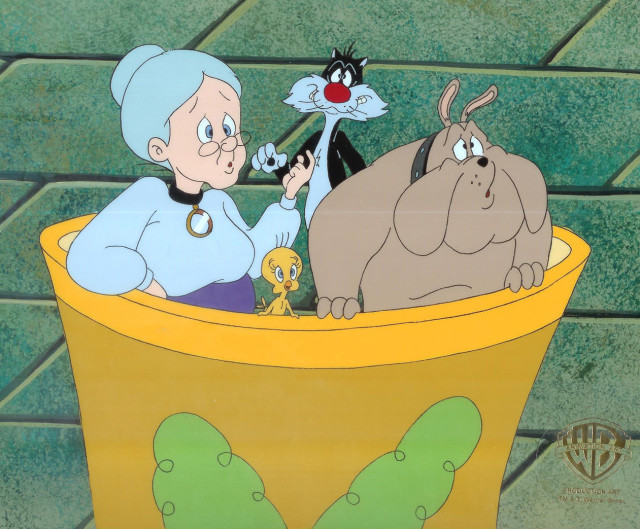 Hector the Bulldog is an animated cartoon character in the Warner Bros. Looney Tunes and Merrie Melodies series of cartoons.

Hector the Bulldog is a muscle-bound bulldog with gray fur (except for A Street Cat Named Sylvester and Greedy For Tweety, where his fur is yellowish) and walks pigeon-toed. His face bears a perpetual scowl between two immense jowls. He wears a black collar with silver studs.

Hector first appeared in 1945’s Peck Up Your Troubles, where he foils Sylvester’s attempts to get a woodpecker. He also appeared in A Hare Grows in Manhattan, leading a street gang; this is also the first short where the dog speaks & the only cartoon where the dog also took the antagonist role.

After those shorts, Hector is a minor player in several Tweety and Sylvester cartoons. His usual role is to protect Tweety from Sylvester, usually at Granny’s request.

He typically does this through brute strength alone, but some cartoons have him outsmart the cat, such as 1954’s Satan’s Waitin‘, wherein Hector convinces Sylvester to use up his nine lives by pursuing Tweety through a series of extremely dangerous situations.

In most of his appearances, the bulldog is nameless, though he is sometimes referred to as Spike. Hector never got his name until Fowl Weather (which was also his first speaking role in a Tweety and Sylvester cartoon).
Fans frequently confuse Hector for Spike or Marc Antony, but by right, the three bulldogs are actually not the same.

Hector’s most prominent role was as a regular cast member in the animated series The Sylvester and Tweety Mysteries. In the cartoon, he plays Granny’s loyal guardian. The show makes Hector’s low intelligence his Achilles heel, as Sylvester is constantly outwitting him, and has him designed similar to Marc Antony.

In most of his modern appearances Hector does not speak.