Shy, and always gentle and responsive, the Havanese is a natural companion dog, which attaches itself firmly to its human family and is very good with children. 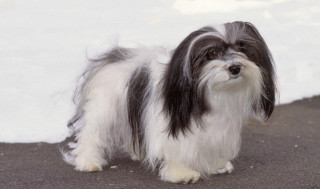 The Havanese could be descended from either Bolognese dogs crossed with small poodles, or Spanish-owned Maltese. A descendant of breeds brought to Cuba from Spain.

The Havanese is Cuba’s national dog. Revolutions are seldom kind to dogs. New regimes often look upon pure-bred dogs as totems of the ancient regime. Following the French, Russian and Cuban revolutions, the cherished breeds of the overthrown classes were actively or passively eliminated. By the mid-18th century, the breed’s popularity included such notable companions as Queen Victoria and Charles Dickens. Some Cubans who left the country during the Cuban revolution brought their Havanese with them, and a handful ended up in the U.S.
Now rare in Cuba, the Havanese is experiencing resurgence in popularity in the United States. By the end of the 1970s, the breed was gaining popularity, and the AKC recognized it in 1996.

Sometimes shy, and always gentle and responsive, the Havanese is a natural companion dog, which attaches itself firmly to its human family and is very good with children.

Temperament: Busy, curious, trainable and intelligent; affectionate with all — animals and humans alike.

Best owner: Someone who wants a small dog who isn’t too yappy or too fragile for kids. Non shedding coat is okay for people with allergies.

Needs: Brushing every other day, exercise in the form of walks or play sessions.