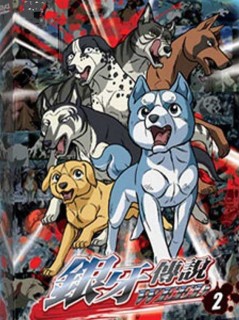 Ginga: Nagareboshi Gin (literally “Silver Fang: The Shooting Star Gin”) is an adventure manga by Yoshihiro Takahashi. It was published by Shueisha in Weekly Shōnen Jump from 1983 to 1987. It received the 1987 Shogakukan Manga Award for best shōnen series.
The series tells the story of an Akita Inu pup called Gin (Japanese for “silver”) who leaves his master, a young boy named Daisuke, to join a pack of wild dogs. The pack is gathering strong dogs from all over Japan to fight a deranged bear named Akakabuto and his minions. The story begins from the point of view of the humans, but swings to the dogs with episode seven of the anime. It is in that episode that the audience hears the dogs communicating with each other through speech, though it continues to be barks and whines to human ears. Takahashi was reportedly inspired by a news article about hunting dogs that had been abandoned by their masters and had begun living as wild animals.
Characters:
Gin (Silver) A tiger-striped (tora-ge), or silver brindle Akita Inu pup. He is the pup that ultimately leads the final battle against Akakabuto. Gin is courageous and loyal, if a little headstrong. He is quick to anger when lives are taken needlessly, which initially sets him at odds with John. After Riki is killed by Akakabuto in the final battle, Gin let loose the Zetsu Tenrou Battouga (roughly: “Wielding the Absolute Fang of Heaven’s Wolf”), the attack of a wolf, slicing Akakabuto’s head clean off. As his father died the way all leaders expected, Gin stood on the top of Gajou and howled for the respect of the dead.

Riki (Akita Inu) Gin’s charismatic father. He was believed killed in the beginning of the series by Akakabuto when he threw Riki off a cliff, but survived and had amnesia, becoming the leader of a pack of wild dogs. He was killed in the final battle by Akakabuto, when the bear slashed him open with his claws, but not before regaining his memories.

Fuji (Akita Inu) Gin’s mother. Though she plays a small role, she is shown to be caring and protective of her pups. It is said that she used to be a hunting dog, but once she got pregnant with Gin and his siblings, she had to retire to take care of her puppies.

Shiro (Akita Inu) Gin’s grandfather and Riki’s father. He was killed by Akakabuto, and appears only in the beginning of the first episode, though he had a larger role in the side-story.

Ben -A Great Dane. He was one of Riki’s platoon leaders. He possesses unusual strength and recuperative ability. He was blinded by poison in a trap set by Akame, who was led to believe that Ben’s group were outsiders helping Kurojaki. He then turned his platoon over to Gin. Although he was blind, he risked his life for the pack during the great battle between Akakabuto and their army of dogs.

Cross -A Saluki. A strong fighter in her own right, she was left for dead by her master after an attack by Akakabuto killed the rest of his hunting dogs. She joined the pack, and eventually fell in love with Ben, becoming his mate. She is the only female to have been accepted into a platoon. She has three pups: Ken, George and Minnie.

John – A German Shepherd. He was Hidetoshi’s hunting dog, but joined the wild dogs after losing a fight for leadership with Riki. At first reluctant to trust anyone, he eventually becomes close to Gin. John is notoriously snobbish and rude, but his fight with Riki seems to give him a much-needed dose of reality.

Moss – An English Mastiff. The leader of the Misty Mountains wild dogs. Sniper tried to turn Moss against Ben by killing one of his subordinates, Lloyd, and attempting to murder Moss’ son, Jaguar, and frame Ben for the killings. Initially this ploy worked, and Moss and his pack fought fiercely against Ben’s, nearly killing Ben in the process. When facts were eventually set straight, Moss joined Ben’s pack, and proved to be a valuable ally in the final battle. Moss has a rather strange sense of humor, and in the manga is frequently seen horsing around with Smith. His also shown to have great affection for pups, being a very gentle and caring father figure.

Sniper – A Doberman. Once Riki’s second-in-command, he sees Ben and Gin as a threat to his authority. After several attempts to sabotage Ben’s mission, he is thrown out of the pack after losing a fight with Gin. Trying to break up the pack before the battle with Akakabuto, he was drowned in a ravine by Ben. In the manga, he survives this encounter and goes on to be an enemy of Gin’s son, Weed.

Hyena – A Weimaraner mix. Sniper’s cowardly lieutenant. Hyena eventually joins back up with the rest of the pack, and betrays Sniper. Hyena commits suicide trying to save Ben from Sniper.

Smith – A French Spaniel mix. Another of Riki’s platoon leaders, he is saved by Gin after one of Sniper’s plots, and they become friends. Easy going, but still serious, he is referred to as a “girl-chaser” by Cross. He also led Gohei to the final battle with Akakabuto.

Akatora, Chūtora and Kurotora -The Kai Ken brothers. As pups, the three were saved by Ben from a marten, but not before Kurotora’s left eye was blinded. Akatora (“Red tiger”), the oldest of the three, is killed in the final battle; he sacrificed himself to take out Akakabuto’s left eye, leaving the bear totally blind. Originally, his intentions in this attack were simply to save the life of Ben. Chūtora (“Middle tiger”) is the one who is missing his right ear. He receives little to no serious recognition and later dies in the time period between Nagareboshi Gin and Ginga Densetsu Weed. Kurotora (“Black tiger”), the youngest, lost an eye in the aforementioned attack.

Akame – A Kishū Inu. He is the leader of the Iga Ninja Dogs. Ben first met Akame when he was still a hunting dog, his owner believed that Akame was a flying squirrel and shot him, wounding his leg. When he realized his mistake, the human brought Akame to his home and treated his injuries. After his wounds heal, Akame pleaded to Ben to let him out of his cage, as his pups were still too young to survive on their own. Ben relents, and Akame returned to the forest to lead the Ninja dogs.
Years later, after falling for Kurojaki’s scheme, Akame poisons Ben and his group. Later realizing Kurojaki’s treachery, Akame is devastated and, with Gin’s help, brings Ben and his dogs the medicinal herbs that will cure the poison. Though they save the packs lives, Ben is left with permanently impaired vision. After a battle against Kurojaki and the other Kogas, ending in Kurojaki’s suicide, Akame joins Ben in his mission and they leave for Shikoku.

Kurojaki – An unknown mix of breeds, slightly resembling a Spotted Hyena. He is the leader of the Kōga Ninja Dogs. He has the distinction of being the only dog to actively use a weapon – a kama, which is eventually used against him by Gin, gouging out his own eye. When Akame burns the Iga house to end the feud, Kurojaki flings himself into the fire, declaring that the war is his only purpose. Most of the other Kōgas follow, and are burned to death.

Wilson – A Rough Collie. He was once a circus dog that traveled all of Japan. His mate Leen and pup Londo were killed by Kurojaki, which drives Wilson into attempting to kill Kurojaki’s son in revenge. He was stopped by Cross, and after that he joined Ben’s pack. Wilson knows many stories, and his knowledge often comes in handy.

Musashi – A Tosa Inu. Once a champion fighting dog, he also joined Ben’s group, and led Gin to Benizakura.

Benizakura – A Tosa Inu mix. Benizakura is seen defeating a bull when Gin first meets him. Gin attacks Benizakura, letting him strike twice, so that he later can demand a re-match. Benizakura’s owner finds Cross passed-out on the beach, and brings Cross to Benizakura. Cross tells Benizakura about the pack and their goal. Gin returns and challenges Benizakura to a fight, and makes him promise that if Gin dies Benizakura will take over as leader of the pack. Benizakura agrees and the fight starts. Benizakura defeats Gin, pinning him down to the ground, but is still impressed by Gin’s fighting spirit, and he then decides to join the pack. Benizakura sacrificed himself to ensure the death of Mosa, one of Akakabuto’s lieutenants.

Kisaragi – A Siberian Husky. He is an ambitious pack leader, and fights with Gin’s pack before the two ally against Akakabuto. He and three other generals prowl Mutsu; Uzuki, Hazuki, and Minazuki rarely get any special attention.

Hakurō – A Siberian Husky. He traveled all the way from Hokkaido to join the battle against Akakabuto. He has a quirky sense of humor and is prone to acting quite brashly.

Bill – A Doberman, leader of the Bandit dogs and apparently a righteous dog, since he stops Sniper from fighting unfairly against Gin and his friends. After Gin has convinced him with his skills Bill and the Bandits join the Ohu soldiers in the war against Akakabuto.

Ginga: Nagareboshi Gin was adapted as a 21-episode anime television series by Toei Animation. In western countries the anime was released as a set of four VHS tapes, and censored for violent images. This led to the removal of several plot-critical scenes, including all footage from the episodes preceding the series finale as well as the deaths of certain characters. Due to limitations of sound-editing at the time this resulted in the background music of certain scenes to be lost.

Atypically, the anime has become extremely popular in Finland, Denmark, Norway and Sweden. The anime has been dubbed in Korean, Thai, Finnish, Hungarian, Danish, Norwegian, and Swedish.

Fansubbed episodes of the anime have also appeared on YouTube, where it has become a popular subject of video mash-ups.