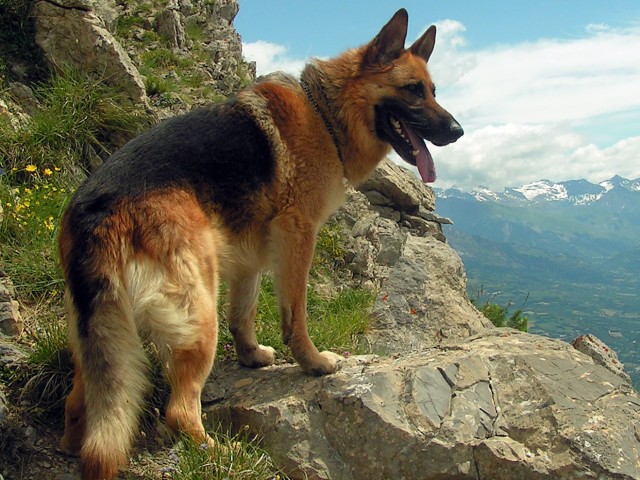 The product of much development, the German Shepherd Dog is the result of breeder efforts to produce the ideal herder and guarder of flocks. The German Shepherd possesses it all: strength, dependability, intelligence, and courage.

German Shepherd Dog and its close Dutch and Belgian shepherd, have existed in much today’s form for thousands of years.

Breed has its recent origins in the superlative breeding program which Max von Stephanitz began at the end of the 1800s. Using long-haired, short-haired and wire haired shepherd dogs from Bavaria, Wurttemberg and Thuringia, breeders produced the obedient, handsome German Shepherd Dog.

By the beginning of World War I, the German Shepherd was popular throughout Germany and swiftly spread to other parts of the world.

Indiscriminate breeding has, unfortunately, produced both physical and behavioral problems. Arthritis of the joints, eye disease and other medical problem occur frequently. Equally common are timidity, fearfulness, nervousness and aggression to other dogs. When bred carefully, however, this is an excellent breed – reliable calm, responsive and obedient.

Today, in most countries, only the short coat is recognized for show purposes.

Thanks to movie stars such as Strongheart and Rin Tin Tin, the breed’s popularity soared in the 1920s and 1930s.

Color:
All colors except white; typically black and tan, sable, and black.

Temperament:
Direct, fearless, and protective but not hostile; suspicious of strangers. A poised, intelligent guardian. Devoted to family; dogs from well-bred lines are great with children.

Previous PostCorgi Pool Party
Next PostHow much does a dog cost?