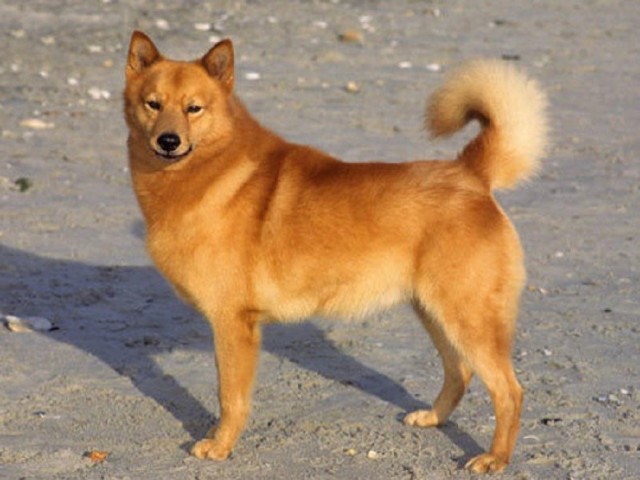 Progenitors of the Finnish Spitz probably accompanied the ancestors of the Finns when they first arrived in Finland. The Finnish Spitz developed from selectively bred Spitz-type dogs that inhabited central Russia several thousand years ago. Finno-Ugrian tribes in the far northern regions bred dogs according to their specific needs.

About 2000 years ago they were brought from the Volga River area of central Russia to what is now Finland. The Finnish Spitz is considered the National dog of Finland. For centuries, this breed inhabited the eastern part of Finland and the Karelian region of Russia. After the Russian Revolution, individuals living in Karelia became known as Karelo-Finnish Laikas.

The Finnish Spitz was a hard-working, independent, popular gun-dog in Finland, and was used to hunt small game; this almost cat-like canine has a tremendous voice and is a superb watchdog.

In the forests, it listens for wing beats, rushes to the tree where the bird has landed, then barks until the hunter arrives, it hunts squirrels and martens in a similar way. The Finnish Spitz makes a good bird dog.

The breed is more popular in Scandinavian countries and less popular in the USA. This cautious yet lively breed is relatively common in Great Britain and North America, and its popularity is likely to grow.

Strong willed, it thrives on exercise, and enjoys working in the coldest weather.

Friendly, active, playful and courageous; it is a great companion for family members of all ages, especially children and older adults. The breed is lively and curious; they are loyal to their own families, but require much consistent patience and understanding. They are good watchdogs, but are not guard dogs.

Active owner, who needs to clearly communicate to the dog that its place is bellow all humans.

It needs plenty of exercise, including daily long walks or jog, where the dog is made to heel beside or behind the human holding the lead, never in front. This breed makes an excellent jogging companion; regular grooming with brush and comb to remove dead hair.