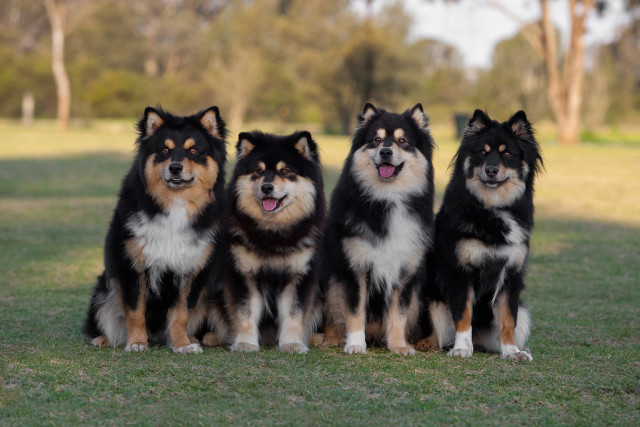 The Finnish Lapphund has its origins as a reindeer herder of the Sami people. A semi-nomadic people inhabiting the far reaches of the Arctic north, Lapland, which comprises the northern regions of Finland, Sweden and the Karelian region of Russia.

The Finnish Lapphund is smaller than the Lapinporokoira, its descendent; originally the breed was used to herd reindeer, today it usually herds sheep and cattle. The breed is developed by crossing northern spitz-type dogs and herding dogs from further south in Europe.

The Sami people use these dogs to herd semidomesticated reindeer.  As interest in indigenous breeds of dog developed, both the Swedes and Finns claimed the Sami reindeer-herding dog as their own.

Finnish immigrants probably brought Lapphund with them when they came to the U.S., but it wasn’t until 1987. The breed was first introduced to the United Kingdom in 1989 and is represented by the Finnish Lapphund Club of Great Britain.

It was introduced in Australia and Canada in 1995. In Finland, the breed’s herding characteristics are not lost. Elsewhere, the Lapphund is more often kept as a companion. These strong dogs were typically long in body; they have dense, luxurious, insulating double coat of hair.

They are excellent with children, other dogs or pets; it is very suspicious of strangers and will bark to alert; it is loyal, devoted, calm, non-aggressive, affectionate and courageous.

This breed need a lot of exercise; do best in a large securely fenced yard or a rural setting with room to roam and a job to do; this dog excels in agility, obedience, fly-ball, search and rescue, and as a therapy dogs; Early socialization and obedience training are the most important things for this dogs; grooming should be performed often to keep the dog’s coat in good shape.