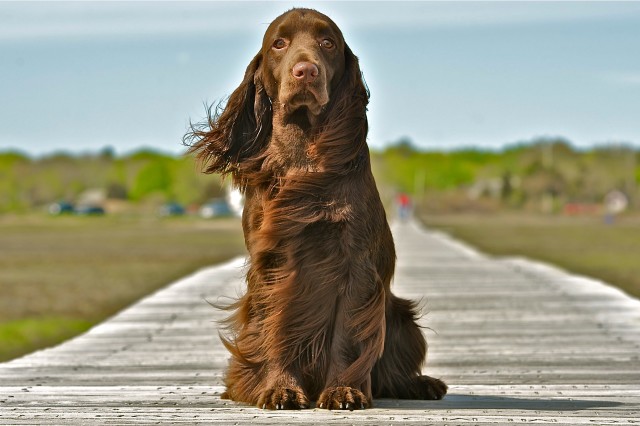 The Field Spaniel can be a good family dog while it has a job to do. They are suitable for dog agility and hunting.

The Field Spaniel was originally developed for the show ring by competitors who were attempting to develop an all-black Spaniel.

As in case of the American Cocker Spaniel, this breeds shape changed dramatically after it was recognized as a distinct breed, with separate status from its ancestor, the English Cocker Spaniel – and in this instance, the results were disastrous.

Early last century, breeders selectively bred for long backs and short, heavy-bonded legs. The Field Spaniel subsequently lost all ability to perform in the field. They were unpopular with sportsmen as the dark colors of the breed did not show up in hunting conditions, and the elongated and short shape of the early breed was not very practical for moving easily through cover.

Unfortunately, breeding for the show ring led to a great deterioration in the Field Spaniel’s working ability. By the end of World War II the breed was almost extinct.

Dedicated breeders revived the breed in the mid-1950s, honing not only its looks, but its hunting abilities. Though admired for its level headedness, the Field Spaniel remains one of the rarest breeds in the U.S.

Size:
Medium, 35 to 50 pounds; females 17 inches; males 18 inches. By 1909, the average weight of a Field Spaniel was 35–45 pounds (16–20 kg). Further mixing of the breed occurred with elements of the Basset Hound introduced. Various genetic health issues arose and action was taken in order to correct the problems within the breed.

Temperament:
Cheerful, affectionate, fun loving, and willing to please. Independent, but happy to have human companionship and a job. May be reserved with strangers. Without some sort of purpose, the dog can often try to amuse itself and cause mischief. However, they are patient with children and like to stay close to their family. When socialized, they are good with other dogs. They are generally docile and independent, and are not as excitable as Cocker Spaniels.