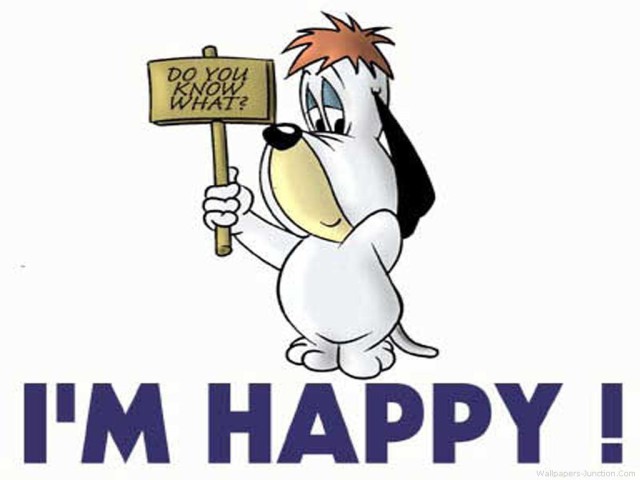 Droopy is an animated cartoon character: an anthropomorphic dog with a droopy face, hence the name Droopy.

Droopy was created in 1943 by Tex Avery for theatrical cartoon shorts produced by the Metro-Goldwyn-Mayer cartoon studio.

Essentially the polar opposite of Avery’s other famous MGM character, the loud and wacky Screwy Squirrel, Droopy moves slowly and lethargically, speaks in a jowly monotone voice, and – though hardly an imposing character – is shrewd enough to outwit his enemies.

When finally roused to anger, often by a bad guy laughing heartily at him, Droopy is capable of beating adversaries many times his size with a comical thrashing “You know what? That makes me mad!”.

Though he would not be called “Droopy” onscreen until his fifth cartoon, Senor Droopy (1949), the character was officially first labeled Happy Hound, a name used in the character’s appearances in Our Gang Comics.

In the cartoon Northwest Hounded Police, Droopy’s last name was given as “McPoodle”.

In The Chump Champ, it was given as “Poodle”.

Nevertheless, Droopy is generally understood to be a basset hound.

Droopy’s first scene is when he saunters into view, looks at the audience, and declares, “Hello all you happy people … you know what? I’m the hero.”

Droopy himself was a versatile actor: he could play a Mountie, a cowboy, a deputy, an heir, or a Dixieland-loving everyday Joe with equal ease.

In the classic cartoons a sad-faced Droopy would often say, “You know what? I’m happy”.