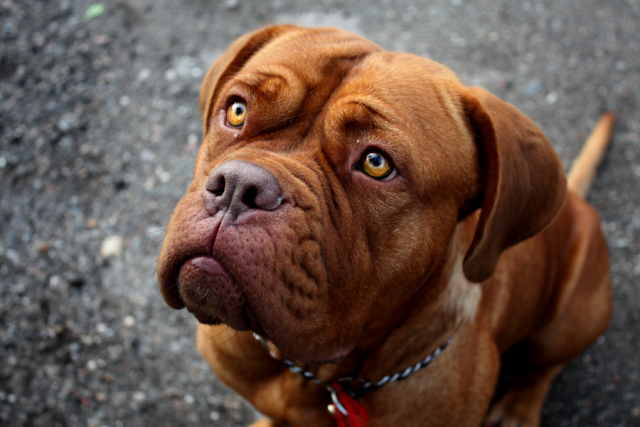 Although the history of the Dogue de Bordeaux is steeped in mystery, it is generally agreed that the ancient breed shares its ancestry with Molossers such as Mastiffs and Bulldogs.

For centuries, the Bordeaux region of France was ruled by English kings. The large guard dogs in that area were almost certainly crossed with the English Mastiff, together with similar dogs from Spain, resulting in this powerful and at one time ferocious, mastiff.

More similar to the recently developed Bullmastiff then to the ancient English Mastiff, this very old breed was originally used for boar and bear hunting in southern France, and then for cattle driving. Because of its fearlessness, the French Mastiff was also used in the animal-baiting arena and the dog-fight ring.

It was not until the breed appeared in an American film in 1989 with Tom Hanks that it attained any recognition outside the France. Unlike the sloppy star of Turner and Hooch, the French Mastiff possesses formidable traits, such as relentless strength, wariness of strangers, and an inclination to intimidate unknown people.

Color:
Shades of fawn to mahogany.

Temperament:
Gifted and courageous guardian, but not aggressive; loyal and affectionate. Can coexist with older children with supervision.