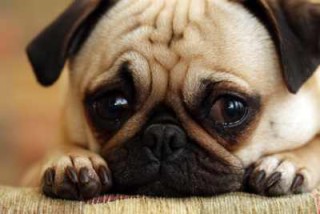 There is no evidence that shows that dogs cry. It’s more a sing of his temperament or maybe undergoing health problem.

A dog way of crying is known as whimpering or whining. Dogs are social animals, and they used whimpering like sound for communicating some sort of distress or it can even be a sign of being frightened or threatened. People who own dogs as pets will hear the whimpering sound even more often. Their pet dog might use whimpering to signal his owner that it needs something: attention, reassuring, food, going for a walk, or a pat on the head.
Dogs don’t use their eyes as much as humans do, but their ears are better than ours. Dogs whimper as babies, because they want to get mother’s help by whimpering. Also, puppies are often out of their mother’s sight, so a sound like a whine makes sense. Puppies are also born with closed eyes, so tears would not be very obvious.
Dogs are the descendants of wolves, but humans have artificially selected them for many thousands of years to keep most of their puppy behavior all of their lives.