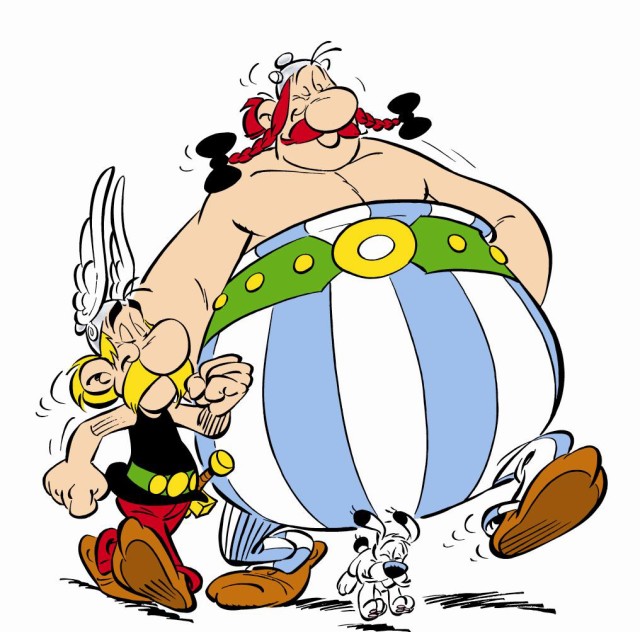 Dogmatix or Idéfix (French) is a fictional character in the Asterix comics.

He is a tiny dog that belongs to Obelix.

Dogmatix is a pun on the words dog and dogmatic. In the original French his name is Idéfix, a pun on the French expression idée fixe (fixed idea, obsession).

He joined them on their adventures, in which he often helps quite a bit and sometimes even saves their lives. He is also good friend with Asterix. Despite his small size, he is quite fearless. He has drunk the magic potion on a number of occasions, but his favorite treat is to ‘chew a bone’.

He is very small for a dog, despite being apparently full grown. He is white, with a black nose, and black on the end of his tail and long ears. Dogmatix is very affectionate of Obelix, and he often holds him in his hands and strokes or pats him. He loves trees and howls in distress whenever one is cut down or uprooted. Obelix forgets this, and does so himself, but most of the time he is aware of it and makes sure that nobody upsets Dogmatix.
Like many dogs, Dogmatix is very protective and jealous of his master, especially when he falls for beautiful young women. In cases like this, he sulks and prefers to walk next to Asterix.

Dogmatix role is minor in most of the stories mainly as a “bone of contention” between Asterix and Obelix. However, he is often doing something interesting in the background and fulfills an important part of the plot.
He later becomes famous for his environmental concerns which are very much ahead of their time (he can’t bear the thought of anyone harming a tree).

What breed is Dogmatix? Now that is a question that has obsessed readers for ages! But, sorry to say, our little dog is unique! Describe simply as “undefined breed”.

For those of you who want to find the Dogmatix of the dreams, we can say that in the two Asterix films, the dogs that have played the part of Dogamtix were Westies (West Highland White Terriers), and in a Asterix special, the role was played by a Maltese dog whose ears had been treated with a bio-dye in order to turn it into a perfect Dogmatix! 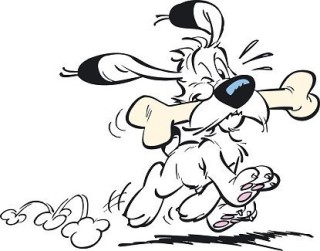 In Asterix and the Actress, he finds a mate and returns with a litter of puppies.

In the 1970s, Dogmatix had his own collection of albums, along with new animal friends to accompany him in his adventures, albums which are highly prized by collectors today.

The man who drew Dogmatix is Albert Uderzo.