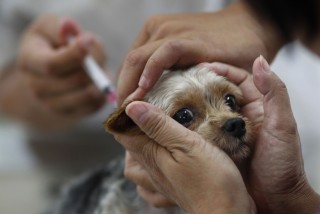 The answer is yes!

This viral infection is the most important infectious agent that you should vaccinate your dog against. Rabies vaccinations are so important.

Rabies can be transmitted to humans by the saliva of an infected dog, through either a bite wound or a cut. When a person becomes ill with rabies, it is generally fatal if not treated within two weeks of the injury. Rabies usually infects an animal (or human) through a wound such as a bite. When the virus enters the body, it moves to a nerve and then travels up the nerve to the spinal cord and brain, where the virus replicates and kills brain cells. The victim then begins to act in bizarre ways: Dogs may become very hyperactive and aggressive, or they may become weak and unresponsive. Death occurs in days, weeks, or months, depending on how far the virus has to travel through an animal to get to the central nervous system.

Luckily, vaccination of dogs against rabies is virtually 100 percent effective, and humans can share home and hearth with their canine companions without concern. Rarely anyone in a developed country contracts rabies today. However, in less developed countries, such as India, 50,000 people (mainly children) still die every year from rabies. Many species of wild animals throughout North America can live normal lives while being infected with rabies. The most common species are foxes, raccoons, skunks, and bats, but other animals can be infected, too. In many species, including skunks and raccoons, the virus can be present at high levels in the saliva and blood without even causing the animal to become ill. For this reason, it is never a good idea to keep these wild animals as pets; in some states and provinces, doing so is illegal. The risk of exposing humans to rabies is just too high. Never touch a dog who is staggering, acting aggressively, or otherwise behaving bizarrely.

If such a dog bites you get medical attention immediately!

Dog Facts Do dogs have menopause?

Dog Facts Do dogs have periods?