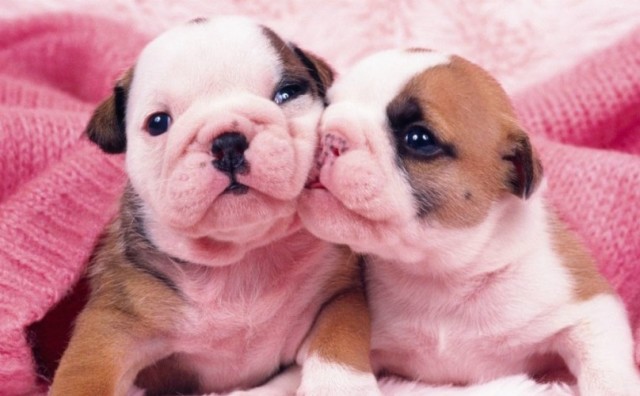 Well, not really. Dogs don’t like kisses for many reasons.

Humans and dogs have different means of communicating. Your dog knows what you want when you ask him to “give me kisses”; it’s a very human way of expressing love to the dog. The language that dogs “speak” does not include kisses in the sense humans know them; Dogs do share gestures of affection, such as touching or rubbing against each other or licking each other in a social way.

Dogs lick to express affection, to show submission and to gather information; when a dog licks itself or another dog, it releases endorphins – stress-relieving hormones – making it a pleasant experience. These gestures are not kisses as we understand them, but they have similar function.

It is possible to train dog to „kiss“ you, with a nose bump or a lick or a nuzzle, by holding a treat – in your hand for hand-kissing or next to your face for cheek-kissing – and encouraging him to lick it; when your dog understands what you expect of him, add the command, such as „Kisses“ as you would train any action.

Some dogs don’t enjoy having their faces near human faces. If your dog feels threatened by a human face up close, don’t force him to kiss you; a dog who don’t like that will give you warning sings such as turning its head, raising its lip or softly whining or growling.

You get to know what your dog does and doesn’t like. If you’ve raised your dog from a puppy and have always showered her or him with kisses and she or he doesn’t try to squirm out of your gasp, then of course continue to kiss away; but always pay attention to your dogs’ body language and behavior.

Dogs have bad days, just as people do. Always take your dogs’ behavior into account before bombarding him with kisses and affection. Some dogs may interpreted getting in a dogs’ face, such as kissing, might lead to biting, because dogs often bite one another on the snout.