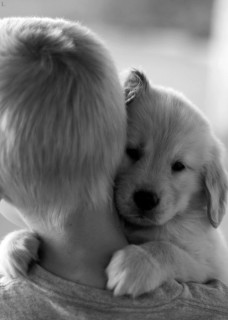 Well, most dogs hate hugs. We as primates think hugs are awesome and express support, love, joy and other emotions through hugs. But dogs don’t have arms and they don’t hug. If a dog places a foreleg or paw on the back of another dog, this is considered an act of dominance. No matter your intentions with hugging, a dog is hardwired to view the act of hugging as you exerting your dominance. Many dogs will tolerate it with grace, but some dogs will feel threatened, fearful, and in fact, a child grabbing a dog for a hug is why many dog bites occur. Also, the same dog that enjoys one person’s hug might react entirely differently with another family member who tries the same thing. You’d be hard-pressed to find a dog that actually enjoys or seeks out hugs.
So next time you want to go in for a hug, pay very close attention to whether or not the dog is okay with it. After all, you’re putting your face right next to a set of sharp teeth!

Previous PostLearn a lot from a dog
Next PostDo dogs hate vampires?