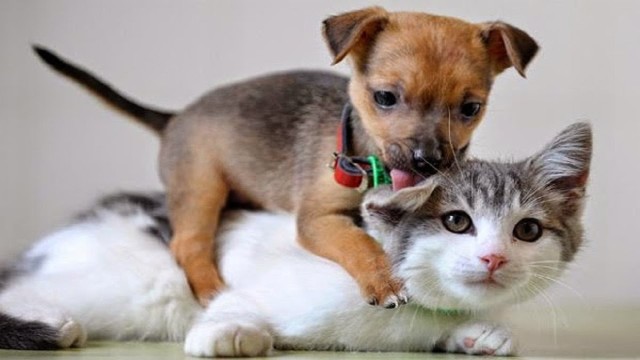 Some dogs really like cats, but their instinct is to chase, and because of that and many other reasons, dogs and cats are not really in love.

Cats and dogs are two very different species, each evolved for different purposes and each with a unique place in their relationship with humankind.

Egyptians were domesticating African wildcats as early as 3500 BC. These tamed cats were called myeo or mau.

Domestic cats have an entirely different outlook on their relationship with people than dogs.

The behaviors that cats and dogs use to communicate are different and can present aggression, fear, dominance, friendship or territoriality.

Dogs have instinct to chase small prey that flee. Most cats flee from a dog, but others take actions such as hissing, arching their backs and swiping at the dog. After being scratched by a cat, some dogs become fearful of cats.

The phrase “fight like cat and dog” must have some truth in it.

If appropriately socialized, cats and dogs may have relationships that are not antagonistic, and dogs raised with cats like the presence of cats.

We can see examples of a dog-cat kinship that is as tender and loving as any friendship.