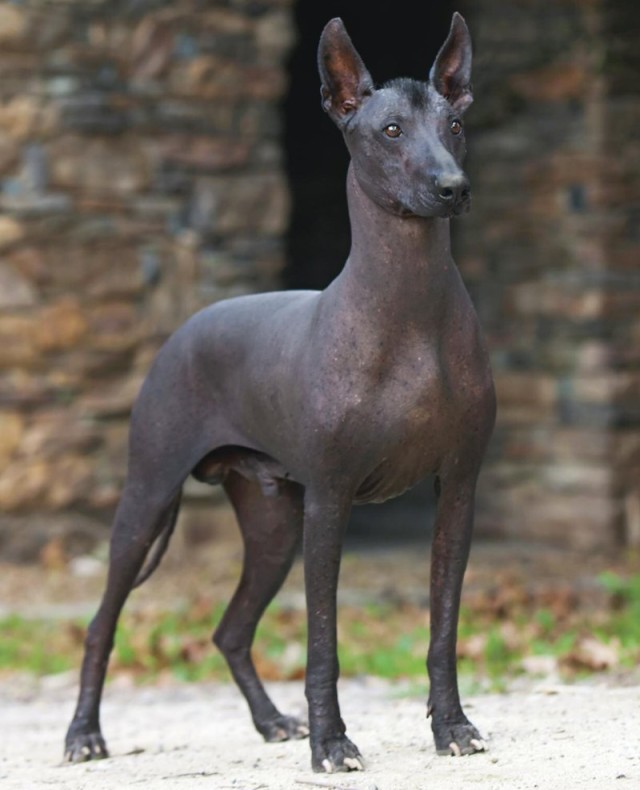 How this hairless breed arrived in Mexico will remain a mystery.

The other name of this breed is Xoloitzcuintli or short Xolo.

Xolo is one of the world’s oldest and rarest breeds dating back over 3000 years.

Artifacts and clay pottery of this ancient breed have been found in the tombs of Colima, Mayan and Aztec Indians.
People believed that this dog would safeguard the home from evil spirits as well as intruders.
In ancient times it was often sacrificed and then buried with their owners to act as guide to the soul on its journey to the underworld.

These dogs were considered a great delicacy, and were consumed for sacrificial ceremonies.
Most references indicate that this breed existed in Mexico at the time of Spanish Conquest, in the early 1500s.
It was probably brought to Central and South America by Spanish traders.

The Xolo is the national dog of Mexico.

This breed is not well known in the United States, and it has been mistaken for the mythical Chupacabras of Mexico.

The Hairless is compared to both, ancient African pariah dogs and European Terriers.

This breed is alert, lively and affectionate.

It’s physical structure is reminiscent of classic sight hounds, but it’s personality is very similar to the Fox Terrier’s.

Color:
The most common colors are various shades termed black, blue and red.

Temperament:
This breed has high intelligence, sensitivity, strong hunting and social instincts; this dog is alert, loyal athletic and extremely loving to its family.

Best owners:
Active owner who can dedicate his time and attention to this dog; is it best when it is made part of the family, receiving regular interaction and socialization with its humans.

Needs:
This breed require a lot of exercise, discipline and attention; they need to be taken on a daily walk; bathe and lotion once or twice a month, or only as needed.