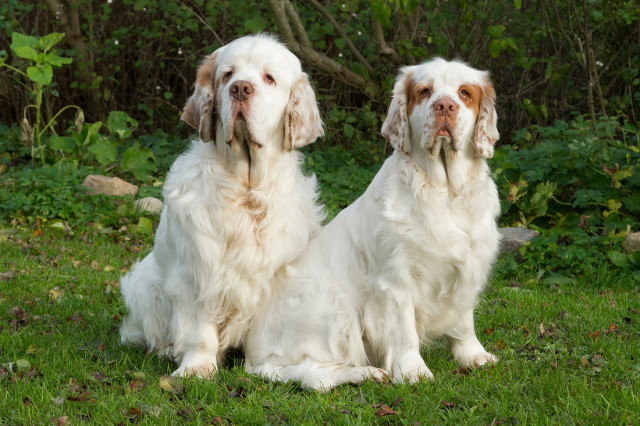 One of the oldest of the Spaniels, the Clumber Spaniels dates back to 18th-century France.

The breed was valued for its low build, quiet nature, and slow gait, which helped it approach game very closely.

Named after Clumber Park, the Duke of Newcastle’s home in Nottinghamshire, England, this unique breed’s ancestors may include the Basset Hound, resulting in its long back and the St. Bernard, from which it gets its massive head.

It is a gundog that specializes in hunting in heavy cover.

The breed has been used to hunt pheasant and partridge, in both small packs and alone.

It is well-suited for work in upland hunting in dense cover and although the Clumber Spaniel is rather slow in the field compared to other spaniels, it is a quiet worker with a fine nose and good stamina.

The broad muzzle of the breed allows it to retrieve a variety of game.

Gentle, affectionate, and devoted; the most low key of the spaniels.

They have several habits which could be considered disadvantages, including a constant shedding of its coat, snoring and the production of excessive drool.

Today, a large proportion of the breed leads its leisurely life in a urban gardens, methodically tracking and retrieving insects and fallen leaves.

English nobility favored the breed and discouraged its popularity with commoners.

Although the Clumber Spaniel is one of the original nine breeds recognized by the AKC, it remains generally unknown to the public.

The breed can suffer from a variety of breed-specific ailments varying in severity from temporary lameness due to bone growth whilst young to hip dysplasia or spinal disc hernia.

It is similar in shape to the smaller Sussex Spaniel.

The Clumber Spaniel has a heavy bone structure, has a massive ‘melting’ head with a mournful and sleepy expression, a square nose and muzzle, and large vine-leaf shaped ears.

Color:
Clumber Spaniels are predominantly white in color with lemon, brown, or orange markings around the eyes, and at the base of the tail.

Temperament:
Their temperament is described as gentle, loyal and affectionate, but dignified and aloof with strangers. They can appear to be a sedate breed and enjoy curling up on the couch, eating and sleeping.

Clumber Spaniels have minds of their own.

Puppies are especially curious and playful.

The breed has a trophy mentality and the dog has an incessant need to carry something most of the time; unfortunately this can lead to health issues as they may ingest the items.