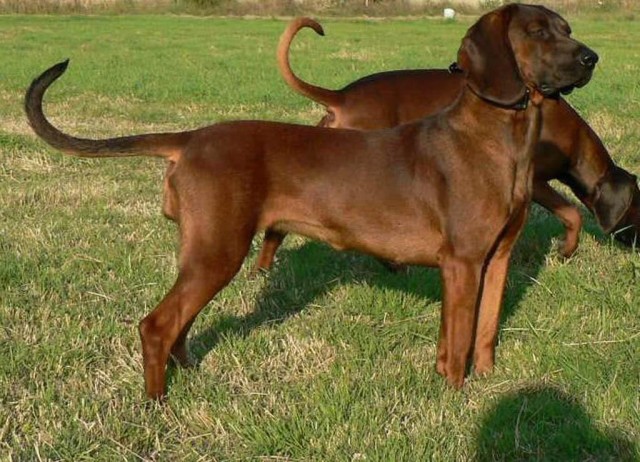 The Bavarian Mountain Hound were first bred in the mountainous regions of Bavaria in Germany, and they were used as Scent Hound; The breed was first developed during the 19th century by crossing Hanovarian hound with Red Mountain Hounds and the result was a lighter dog that would be able to work.

The Bavarian Mountain Hound is a small, agile dog with superb scenting ability was required to track wounded deer in the Bavarian mountains.

Rarely seen, except in the hands of professional foresters and game wardens in Germany and the Czech and Slovak republics, this is a resourceful and ardent cold-scent follower.

This dog usually works independently with its handler, and is frequently used when dogs with inferior blood-scenting ability have lost the trail of a wounded animal; the honour code of the middle European hunter instructs that no animal should be left to die on its own.

The Bavarian Mountain Hound is a very athletic and elegant, well-balanced dog. Over the years these dogs have proved themselves to be highly skilled at the job they were bred to do.

These handsome dogs are gaining popularity with people thanks to their charming looks, their scenting skills and the fact they boast such loyal and affectionate natures.

It is a calm dog and one that becomes devoted to their owner, but a little suspicious and way of strangers; agile, quiet and extremely loyal dog.

Owner who spend most of the day at home. Because these dogs form such a strong bond with their owners, these dogs don’t like to be left on their own for extended periods of time.

They need a minimum 2 hours a day and this needs to be vigorous exercise that includes a ton of mental stimulation off the lead, ideally playing lots of interactive games; they enjoy being allowed to roam around a secure back garden; a weekly brush; it’s also important to keep an eye on dog’s ears.