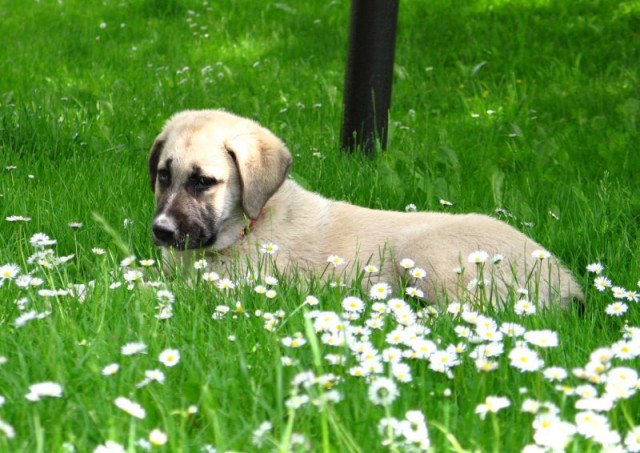 More guard dog than herder, the Anatolian Shepherd Dog has origins in ancient Turkey, with probable ties to the Tibetan Mastiff and Roman Mallosian war dogs.

About 1000 years ago, the Turkic-speaking people entered Asia Minor occupying the region that is now Turkey. They brought with them their great, herd-guarding dogs. The Anatolian Shepherd dog descends from these dogs.

Turkish shepherds never used dogs to herd sheep, only to protect them from predators. These sheepdogs were collectively classified as “corban kopegi”, but in the 1970s breeders began to investigate regional variations. Karabash-type sheepdogs are found in central Turkey. In its native land, the Karabash remains a guardian, protecting flocks from wolves, bears and jackals. Strong willed and independent, it is not an entirely suitable companion, although with careful socialization it can adapt fairly well to a family environment.

The Anatolian Shepherd dogs served as staunch defenders of livestock and are still valued for their hardiness, loyalty, and independence.

Temperament: Serious about its job as protector, yet calm and easygoing. Intelligent, adaptable, and territorial; may perceive children as part of flock to be guarded.

Energy level: Low (except when a threat is perceived).

Best owner: Strong owner in a rural or suburban home.