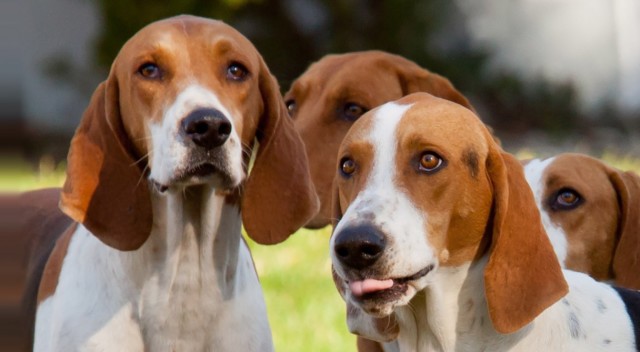 The American Foxhound is taller and lighter boned than its European counterpart, although until the 1900s new blood was routinely introduced from Europe.

A native U.S. breed, the American Foxhound traces its origins to the late 1600s and early 1700s, when it was developed from various Hound breeds imported from France, England, and Ireland.

George Washington, who ran a breeding program for the breed, is sometimes called the father of the American Foxhound.

When working, it tends to act individually, rather than in a group, with each dog having a distinct voice and being willing to take the lead.

In the northern United States fox hunting follows traditional European patterns – the hunt is by day and the fox is killed.

In southern states a hunt may take place day or night, and the fox is not necessarily killed.

Although the breed’s great speed and agility have made it a popular choice for hunters, the American Foxhound has experienced limited popularity as a pet for no hunters.

Temperament:
Tolerant, gentle, amiable; reserved with strangers, but can be a well-mannered household companion. A hunter at heart; may be stubborn or independent.