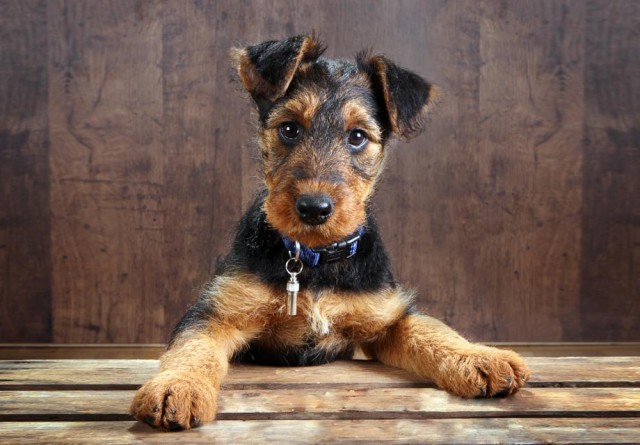 The Airedale Terrier is a dog breed of the terrier type that originated in the valley of the River Aire, in the West Riding of Yorkshire, England, when working men in Leeds crossed the Old English Broken-haired Terrier with the Otterhound, producing this extremely versatile “King of Terriers”.

The first Airedales looked completely different from the Airedales of today; They were originally known as the Waterside and Bingley Terriers.

The Airedale Terrier was used as a vermin hunter and was named for the Valley of the Aire in England, which was heavily populated with small game; In addition to his role as a small game hunter, the Airedale has been used to hunt big game in India, Africa and Canada.

A born watch dog, with a delinquent tendency to get into street brawls with other dogs, the tough, hardy, and faithful Airedale has been used as a police dog, sentry dog, and messenger. Were it not for its inherently strong stubborn streak, it would be a popular and successful working dog.

Although the Airedale is far too large to live up to the definition of the word “terrier”, which in French means an ability to go to ground, in all other ways it is the essence of this group of dogs.

Today the Airedale is primarily a companion dog, but there are still working lines out there; Some of the Airedale’s talents are guarding, watchdog, hunting, rodent control, tracking, military work, police work and competitive obedience.

Tan and black, and tan and grizzle.

A calm, but firm, confident and consistent owner.

They need to be taken for long daily walks; most of them love to play with a ball, swim or retrieve objects and once fully grown will happily run alongside a bicycle; they have a hard, short-haired, double coat; the hair should be plucked about twice a year; trim excessive hair between the pads of the feet when necessary; they need a good bit of grooming; the beard should be washed daily because of food residue.

Previous PostWhy do dogs chase their tails?
Next PostDo dogs miss their owners?